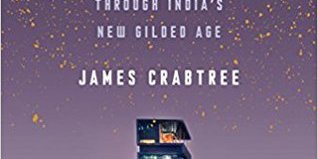 While starting a book your mind is full of expectation. These days, the expectation is accompanied by incessant touting on the social media by the author and the publishing team. I'm not blaming them - that's how you sell. In the end, though, your assessment of the book is coloured by this because in some sense it is part of your engagement with the book. That's the primary difference between the review I posted last week and this one. I read and reviewed Haroun and the Sea of Stories fairly long after its release, so it wasn't really in the zeitgeist so to speak. The review I'm reposting now, though, was written somewhat soon after the book's release so the tone is slightly different.

Before the 2008 recession hit India, the newsrooms were abuzz with the narrative of the success stories of business tycoons, especially in the city of Hyderabad where I was based - some were rags-to-riches stories while others were stories of how traditional family businesses had pivoted into consumer focussed industries, starting with the construction and maintenance of airports and malls and venturing into all kinds of other industries. These stories would make one wonder about the impetus for this kind of growth and its sustainability. And that’s when the news of their “highly leveraged balance sheets, poor cash flow, corporate governance questions and corruption controversies" came out. The story of some of their travails has been described well in this article. In the next few years, news of fraud, deception, and scandals of many other “business maharajas” have come out.

All this has made one wonder about the nature of inequality and how it affects societies and economies, not just in India but all over the world. So when a book came out promising to tell the inside story of all the ballyhoo, I sought it out with all the eagerness I could muster. Having read it now, though, I’m sad to say that The Billionaire Raj didn’t really live up to the hype for me. The book reads like a bunch of disconnected essays, which are good reads by themselves but fail to tell a complete and cohesive story. It makes one wonder whether this is due to the author’s experience as an FT Editor.

An acquaintance pointed out that the author’s got some good interviews. Indeed he has, but he doesn’t ask any probing questions. It’s almost like he doesn’t want to offend his interviewees. The interviews just read like reportage and he doesn’t even tell the reader what to make of them, which I feel is important to drive home the point of your book. I feel that might be one of the biggest missing elements of this book.The book also doesn’t string a thread through the interviews or connect them in anyway. For example, the author interviewed Mallya and his largest lender SBI’s CEO, which he could have converted to a virtual question-answer session or at the very least asked them similar questions so that we could hear two sides of the same story but he doesn’t. Truth be told, it's fairly difficult to say whether he's actually done that because the interviews don’t follow each other so you’ve forgotten the specifics of Mallya’s interview by the time you reach Arundhati’s.

On a related note, there is also no analysis or explanation of how these people borrowed large amounts from bank after bank, creating a mountain of debt that even put the banks in peril. There are so many questions left unanswered - the main ones on the business and banking side were pertaining collaterals. On the political side of things, one would ask how the politicians and businessmen colluded, what was the extent and nature of corruption and what did the Governments do or not do?

There are also other things which the book talks about, which are topical but it’s a bit difficult to connect these to the main theme of the book. For example, it talks about things like demonetisation and GST but it doesn’t say how these economic events affected these billionaires. If they didn’t affect them, I wouldn’t spend so many pages in just describing these events. In the same category are some personalities and events that find mention in the book but are not directly connected with its theme so one wonders why they are even there. One of them is Rakesh Jhunjhunwala - he is a capital markets investor who admittedly doesn’t have any dealings with these businessmen. He did make money by investing in some listed companies that these people own but one fails to understand why he deserves so much space. There is also a whole chapter on Arnab Goswami (a renowned TV news-anchor) but there is no mention of what he said about these billionaires and the scams - how much of it was true and whether or not it altered public thinking. And then there is the IPL. This obviously is directly related to the tycoons but everyone knows that. What one would expect is some ideas about how the owners, especially those not in show-business, got the money? Did they borrow again - if yes, what was their collateral and how did they convince the banks?

Apart from this there were a few small factual errors which don’t matter much but I personally don’t like them in a work of nonfiction. One was calling cricket India’s "national sport" - it is the most widely watched, supported, and played sport but the national sport is hockey. Calling Amit Shah tall - he’s just 5’ 6”, which is not tall even by Indian standards - this error becomes even more glaring when one considers that the author himself seems much taller (he almost looks a foot taller from his pics).

Moving away from the nitty-gritty, at the thematic level, the comparison to America‘s gilded age seems like a nice premise but come to think of it, in America during the said age, new infrastructure was actually built and new businesses were started that have sustained and grown over the last century. The actors who this book is about did not power any such advancements in India. This brings us to the article which gave the author the idea for the book and its subtitle, comparing this Indian period to the American one. The co-author of that article, Jayant Sinha, merits a mention obviously but citing him and his ideas so many times gives one a feeling that his ideas are being given air so that people think how thoughtful he is, about economics. To link your book so closely to a political figure is not a great idea. What irked me even more is the fact that Mr. Sinha, just a few days ago, was involved in a politically motivated stunt, where he was photographed garlanding people who were convicted for communal lynching. His actions may not be related to the ideas in the book but if I were writing or publishing it, I would've gone back and revised the many mentions and quotes.

Overall, the book didn’t leave much of a good taste in the mouth, but the last bite - the last chapter - was pretty good. Each paragraph in this chapter seemed to address the problems described in each chapter. So maybe the same paragraphs, or slightly longer versions of them, could've been added at the end of each chapter. In fact, I’d go as far as to say that the book itself could've been composed of chapters that were extended/analytical versions of each of these paragraphs - come to think of it, such a book will probably make a good sequel to this. Any takers?